An expressive mask, like the classic archetypal Commedia masks, has complexity and range. The mask is the essence of the true character, which is established early in the scenario. But characters in Commedia are contradictory, and can change in an instant. This allows the performer, at a certain moment, to play “contre le masque”: against or opposite the mask. The counter mask reveals the character’s fantasy or repressed feelings.

Pantalone is a tightwad, old, greedy, gullible and mean-spirited. At a certain moment, though, he can take a fancy to an attractive woman, and somehow imagine that he could charm her. As he dreams or fantasizes of youthful prowess, he can “act” those traits, in denial of his true character. We laugh at his foolishness, as the counter mask causes him to over-extend himself in fatigue and folly.

The mask of Capitano has duality at its heart. The braggart soldier is a cowardly liar in reality. He dreams of being a great hero and lover, and believes his own boasts until Arlecchino or one of the clever serving maids exposes him with frightening jokes or pranks. So we see him flip from braggart to coward in an instant. 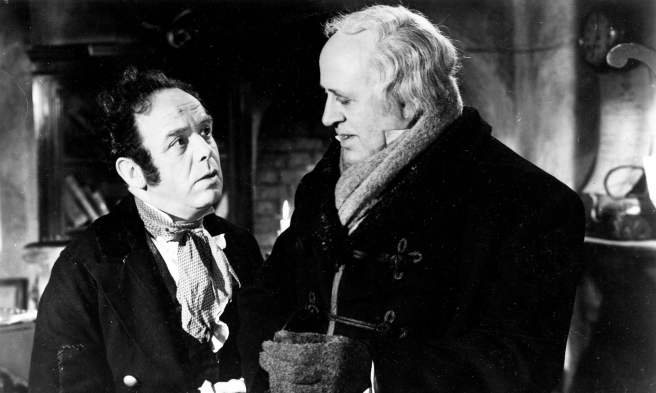 Alastair Sim’s remarkable performance in Scrooge defies the rule. Scrooge’s true character is the light-hearted, generous man we meet on Christmas morning after his long night of visions. His counter mask, formed by emotional trauma and deprivation, is the ungenerous soul we think of when the character is mentioned. Throughout the 1951 film, Sim lets us see glimpses of Scrooge’s true mask, sometimes with only a twinkle in his eye, or a wry smile when he shakes his head at the thought of the Cratchits enjoying Christmas on the meager salary he pays.

Playing the counter mask from time to time allows for variety in a character, and reminds us of the complexity of human nature.  In this performance, the tension between mask and counter mask becomes the essence of the story.